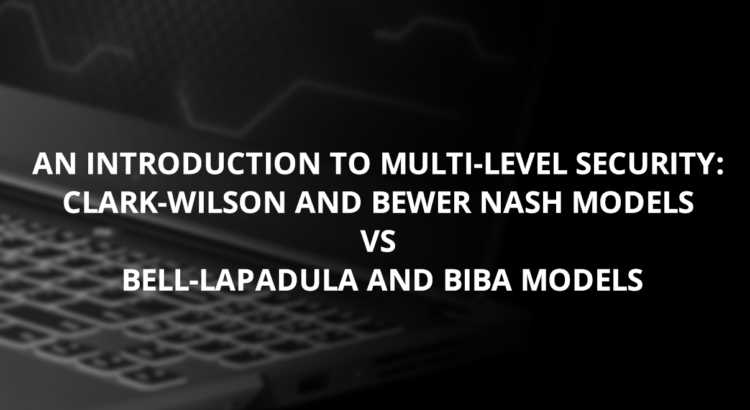 This model is built on the state machine concept which focuses on information flow. Data and subjects are grouped into multiple levels. This model was designed so that users may not modify the integrity of data in a level ranked higher than the user or be corrupted by data from a lower level than the user. This model is directed towards data integrity rather than confidentiality and can be described by the phrase “read up, write down”. The Biba Model has a set of three rules and the first two rules are the reverse of the Bell-LaPadula rules.

The Clark-Wilson model was originally described in a 1987 paper by David D. Clark and David R. Wilson. This model was proposed to formalise the notion of information integrity especially when compared to the requirements for multilevel security by the Department of Defence. During this period much of the work on security models focused more on confidentiality rather than integrity.

The Clark-Wilson model is based on preserving the integrity against potential data tampering. This model states that only authorised users should be able to make changes to the data. The model focuses on the user not being able to have complete and utter control to the data but rather allowing the user to modify the data in a controlled way.

The components which make up this model are as follows;

This model describes how data items in the system must be kept in a valid whilst moving from one state in the system to the next – to achieve this, the model defines enforcement rules and certification rules. This model effectively states that modifications to objects must be done in a controlled way rather than allowing the subject direct read/write access. This model therefore protects against unauthorised changes from any user and enforces separation of duties thus making it a good design for commercial applications.

The Clark-Wilson model and the Biba model share some characteristics such as ensuring the integrity of data rather than the confidentiality. The Clark-Wilson model uses two levels of integrity; unconstrained data items and constrained data items. The advantage of using the Clark-Wilson
model is that all modifications must go through a trusted transformation process thus preserving the integrity of data. The Biba model on the other hand has a very simple integrity check; subjects can only read an object if the subject permission level is less than or equal to the object.

The Brewer-Nash model, also known as the Chinese Wall Model is a security model where read and write access is governed by conflict of interest categories to which files/data are assigned.

The diagram above shows how if a user retrieves data about one company, He may no longer access data about the competing (COI) company. The “conflict of interest” decision making is dynamic which means it must be able to remember what was accessed in the past before
deciding whether to allow the subject access.

This model states that no information should flow in a way that would create a conflict of interest.

Note: This post was also written towards the latter part of 2020 – I forgot to hit the publish button!